This article was published at VHeadline: 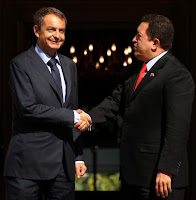 What is clearly emerging is that Spain wants Venezuela and Cuba to hand over ETA members residing in their countries.

Spanish Foreign Minister Miguel Angel Moratinos has announced that the writ against ETA and FARC members allegedly plotting to kill Colombian presidents in Spain has been sent to Cuba and Venezuela via the Spanish ambassadors, who have been given the task of ensuring the collaboration of both countries in hunting down ETA.

In Cuba the main target is Jose Angel Urtiaga Martinez whom 15-minutes-of-fame Spanish Judge Velasco claims is ETA's representative to the FARC. Another is alleged second in command, Jose Miguel Arrugaeta San Emeterio. Both men are charged with relaying explosives training.

Moratinos has declared that the Spanish executive is acting in full cooperation with the autonomous legislative power and Congress. All three institutions have clubbed together on this one.

Yesterday, Moratinos took off his government's mask, saying Chavez has "collaborated in extraditions and has demonstrated his disposition to accompany the Spanish government's efforts to eradicate, combat and defeat ETA."

Meanwhile, Assistant Secretary of State for Western Hemisphere affairs, Chilean-born Arturo Valenzuela has tuned into the Spanish-Colombian campaign against Venezuela and rebel organizations, declaring that Venezuela has given "some assistance" to the FARC who are receiving specific types of help from different groups.

Spain, Colombia and the USA will be attending the inauguration of right-wing crusader, Chilean President Sebastian Pinera, who has made a great fuss inviting Venezuelan opposition leader, Antonio Ledezma to the event.

President Chavez said he will not be attending the inauguration but his name will be top of the agenda in corridor meetings.

Update: a "Don't Extradite the Basques" campaign has been set up in Northern Ireland against the British government's decision to allow the extradition of former ETA prisoner and hunger-striker, Inaki de Juana, who has been living in the North for the last two years.

The Sinn Fein party is organizing the campaign and the party's euro-deputy, Bairbre de Brun said Inaki was being pursued for his political ideas and extradition to Spain should be dropped.

De Brun argued that both the British and Spanish governments are ignoring important political initiatives in the Basque Country to resolve the conflict.

De Juana spent 21 years in a Spanish jail, of which 17 years were in solitary confinement.

Last year an ad hoc committee in Venezuela succeeded in stopping the extradition of another ETA member.

A Whale of an Exoneration

We found this interesting article about the early presence of the Basques in America (Canada specifically) at Montreal's based The Gazette:

In an impressive case of CSI-style sleuthing, researchers examining a single, 450-year-old whale bone from Labrador's south coast have exonerated the prime suspect in a whodunit from the dawn of Canadian history.

The DNA profile of a North Atlantic right whale's humerus — collected from the remains of a shipwreck at the historic Red Bay whaling site along the Strait of Belle Isle — shows that Canada's most endangered species was already suffering from a critically small population and a lack of genetic diversity before Basque whalers began harvesting the giant mammals in the 16th century.

The Basques have long been blamed for decimating the right whale population off Canada's coast. But the new research by a team of Canadian and U.S. biologists, published in the latest issue of the journal Conservation Genetics, indicates that right whales were rarely killed by the Spanish-based whalers and that oil-rich bowhead whales were almost exclusively their targeted species.

The first key finding in the centuries-old cold case was that only one right whale bone could be found among 218 specimens collected from historic East Coast whaling sites, meaning the bowhead was clearly the Basques' prime quarry.

Then, led by Trent University researcher Brenna McLeod, the team compared key genetic markers in the ancient right whale bone with those of present-day right whales — and found no significant differences.

The samples revealed a relatively low level of genetic diversity among the whale's North Atlantic population both today and in the past — a result that makes clear the species' problems in Atlantic Canada began long before the Basques arrived in the region in the early 1500s, the team has concluded.

The findings "are not consistent with the suggestion that Basque whaling activities were responsible for what was previously thought to be the largest reduction of the right whale population," the researchers state.

The results also indicate that "the major decline in this species occurred prior to whaling and that the pre-Basque population of right whales in the western North Atlantic was much smaller than has been assumed."

Today, scientists believe there are only about 350 North Atlantic right whales migrating annually between waters south of Nova Scotia — where they spend much of the summer and fall feeding and breeding — and Florida, where calves are typically born in late winter or spring.

The right whale can grow up to 18 metres in length, weigh more than 100 tonnes and live as long as 70 years.

But the latest findings, which the authors claim have "rewritten the history of the species," appear to point the finger at a post-1400 cooling period known as the Little Ice Age for the historically restricted numbers of North Atlantic right whales along Canada's eastern shores.

"Our research suggests that some of the factors (such as low levels of genetic variation) that may be limiting right whale recovery in the western North Atlantic have been present for far longer than we had thought," McLeod told Canwest News Service on Friday.

She added that the more scientists can learn about the right whale's history "the better we can understand how those factors are playing a role in the patterns and process of recovery in the species today."

The researchers note that while bowhead whales were the key Canadian target for Basque whalers, historic harvests of right whales throughout the broader North Atlantic world have decimated some populations.

In fact, the animal was named the "right" whale to target for easy hunting because it swims slowly and near the surface, typically stays close to the coast and conveniently floats to the top when harpooned.

Lamp oil rendered from whales killed in the Strait of Belle Isle became the key commodity for the Basque entrepreneurs, who developed shoreline "factories" that produced thousands of barrels of oil and organized regular shipping schedules between Canada and Europe to deliver the product.

Although the presence of Basque whalers in 16th-century Canada was long known to historians, it wasn't until federal archivist Selma Barkham presented fresh evidence at an Ottawa archeological conference in 1977 that plans were made to search for physical traces of Basque activities in modern Labrador.

In 1978, a Parks Canada-led team of researchers discovered the sunken remains of a 1560s-era, three-masted whaling vessel.

Other major finds followed the discovery of the 20-metre San Juan, including three other "galleon"-class transport ships and a well-preserved "chalupa" rowboat used by whale-hunting crews in their deadly chase.

There just a couple of things we would like to point out; the Basques were fishing off the coast of what one day would be known as Canada long before Columbus and Cabot stumbled upon America. And there is no reason to call them Spaniards, in the early 1500 (the estimated date given to us by the author) the Basque kingdom of Navarre was still an independent and sovereign political entity. The Spaniards began the final assault until 1512 and the Basques were still fighting all the way to 1524. Castile and Aragon managed to get control of the Basque homeland to the south of the Pyrenees, to the north, Donibane Garazi became the kingdom's capital city for many more decades.

The interesting part is, how come the Native Americans living close to the Basque fisheries did not suffer any European disease epidemics like their neighbors to the south?

Gaztelugatxe
Originally uploaded by nadia_the_witch
Posted by Aleksu at 9:09:00 AM No comments:

La Nive
Originally uploaded by dynamosquito
Posted by Aleksu at 11:46:00 AM No comments:

Originally uploaded by Soniko
Posted by Aleksu at 2:24:00 PM 1 comment:

Thousands of people marched through the Basque city of Bilbao on Saturday to demand that rights for the Basque political prisoners are respected by both Madrid and Paris. The protest was called by leftist Basque nationalist groups, including Etxerat, an association of family members of political prisoners which accuses the governments of Spain and France of punishing relatives and friends by holding the political prisoners in prisons far away from their homes.

A judge in Madrid earlier Saturday rejected a legal move to ban the march by an extreme right group called Justicia y Dignidad. But he ruled that the participants must abstain from showing expressions of support for ETA. As a result, the marchers did not display photographs Basque political prisoners, unlike in a similar march one year ago.

Basque political prisoners are dispersed in prisons throughout Spain which makes it difficult for them to receive visits from family members. On Friday, Spain's Supreme Court ruled that the Basque regional government had exceeded its authority by providing aid to families of prisoners being held outside of the region to allow them to visit their loved ones.

The aid was awarded between 2003 and 2009 by the Basque Nationalist Party, which held power in the region until last May when it was replaced in elections by the Socialist Party. The fascist regime that rules in Madrid has murdered thousands of Basques since 1936 in a futile attempt to hold on to its illegal occupation of Euskal Herria.