This article about the Basque cycling team Euskaltel-Euskadi was published at the Daily Peloton:

In American parlance, the emphasis is on rebuilding, as Basque team Euskaltel-Euskadi takes to the 2009 season with a reduced roster compared with 2008 and an emphasis on youth.

In American parlance, the emphasis is on rebuilding, as Basque team Euskaltel-Euskadi takes to the 2009 season with a reduced roster compared with 2008 and an emphasis on youth. Of course, it is a campaign strategy complicated—or at least touched by irony - in that the squad is headed by Olympic gold medalist Samuel Sanchez. Sanchez will be a marked man this year, and any Euskaltel-Euskadi contingent in a race that includes him will have little opportunity to test its mettle under the radar. 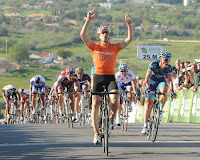 One wrinkle of Sanchez’s higher profile is the question of the role Koldo Fernandez will play in the 2009 campaigns. He is the team’s first legitimate sprinter, a rider they intend to help develop into a weapon they have never before brought to the peloton. Fernandez is an example of how Euskaltel-Euskadi is developing its tactical options under the leadership of DS Igor González de Galdeano, a veteran of earlier incarnations of a team which distinguished itself for the passion of its fans and with very few results to show for it. Basque fans want to see their riders attack on the mountains, says team press secretary Jesus Aizkorbe. As a youth, “Koldo was a great sprinter, but when he was an amateur he tried to be good in the mountains.” Since he joined the team in 2004, managers have “convinced him to be a sprinter. He’s unique in the team’s history. We have had fast riders before, but not sprinters.”

Fernandez’s presence on the team and Sanchez’s increasing skills as a one-day specialist has led to the Basque team’s interest in the northern classics shifting from one of grudging acceptance that UCI pro tour rules required their presence, to an attitude of at least some interest. It is an interest tempered by Sanchez’s focus on preparing for Le Tour. Rather than taking both Fernandez and Sanchez to the north, then, Euskaltel-Euskadi has sent one squad north with their sprinter while another works to support Sanchez in the south.

It was a strategy that started less than convincingly when Fernandez managed 51st place in the Tour of Flanders, having missed all major breaks. But things looked up a bit on April 8 when Fernandez managed sixth in a field sprint at Gent-Wevelgem and Sanchez moved into second overall in the Vuelta al Pais Vasco in front of home crowds.

In 2009, the team is choosing to stay away from some races in which it has historically played no great part, chief among them the Giro D’Italia, where the team’s 2008 experience was described by one critic as that of “strangers in a strange land” and by another as “dreadful.”

Aizkorbe is blunt in his assessment, “We have no interest in the Giro. In 2005 and after we were obligated to go, but there’s no interest for us or our sponsors.” With the separation of the pro tour from the historic races, Euskaltel-Euskadi is “free to decide,” while acknowledging that the team “must compete in the Vuelta al Pais Vasco and Le Tour.” Aizkorbe is clear that ASO has committed to offering the team a Tour invitation for the next several years.

In 2008, the foundation that runs the team finished the year about €1M in the red and is looking forward to a less expensive 2009 campaign. The size of the squad has been reduced from 27 to 23, a little larger than originally planned. The most noticeable change from 2008 is the departure of long-time rider Haimar Zubeldia, now with Astana.

Despite these challenges, team management is increasingly confident of its ability to attract the best in Basque talent, as the return of Egoi Martinez from Discovery in 2008, and the decision of Sanchez to stay after his Olympic medal suggest. After the Olympics, foundation president Miguel Madariaga publicly acknowledged he would not be able to offer a salary much larger than that which Sanchez had accepted earlier in the year. The contract was renegotiated, but Sanchez endeared himself to team and fans alike when he stated bluntly “I see myself at Euskaltel.”

Sanchez’s perspective is not unique. Mikel Astarloza says pointedly, “for years we had the pressure [of having to keep up]. But now we come with a feeling of pride.” Under the leadership of Madariaga and Igor González de Galdeano the riders have solidified behind a philosophy that “the team knows it’s known. The riders know there are big teams out there, but it doesn’t mean our riders are not competitive. Their mission is to do their best. Now, when riders reach this level they choose to stay here,” says Aizkorbe. With a little prodding he says of the rider whose name is still associated with the team, “Iban Mayo was a completely different case. He never bought into the idea of Euskaltel-Euskadi.”

As part of its commitment to developing younger riders, the team is also looking to offer longer contracts. Within the pro tour peloton, contracts for all but the very biggest names are for one or two years, but Euskaltel-Euskadi is moving to offer three-year contracts and so its staff is paying more attention to the younger riders. “You have to be confident to offer a contract like that,” says Aizkorbe.

Still, there are challenges despite the greater flexibility in scheduling, the addition of a pure sprinter to the team’s top flight, and the options offered by having a one-day threat in Sanchez who is also a legitimate Grand Tour contender. 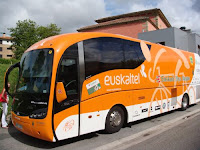 The fan base has at times got out of hand, and organizers of Le Tour responded by changing when the race comes through the Pyrenees to try to get past the ugly TV images of the recent past. The riders have become advocates of better behavior, reminding the Basque population that the world is watching. “There were really difficult days in the Pyrenees,” Aizkorbe admits, and for a while tour organizers avoided weekend stages in the Pyrenees, but although “it’s a bigger problem than the team can solve the team tries to get the message to fans. But there are people who don’t understand cycling. They are soccer fans who go there to have a party. It’s not comfortable.”

Still, these days the team is in the position of trying to adjust people’s expectations. In the past, “the team has been criticized by journalists for trying too hard to win a stage in the Pyrenees,” Aizkorbe says, “but now it’s not enough for us just to win a stage, so we cannot afford anymore to go into the Pyrenees and then relax. For us it’s better when the Alps come first,” as they will not in 2009.

As for the Vuelta a Espana, which famously avoids the Basque country, Euskaltel-Euskadi would very much like to see it move back to the spring slot it used to occupy, after the Vuelta al Pais Vasco and before Le Tour. It would in some sense allow the team to return to its main purpose, representing the Basque country where, in Astarloza’s words “cycling has reached the people.”