This may sound like bad news to many but we agree that the stock needs to be replenished to make sure we do not really regret it in the future:

Anchovy veto gets year's extension on Gulf of Biscay 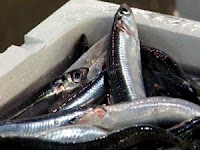 Before the ruling of the committed, the ban - which was due to be in force until 30th June 2009 - will be automatically extended. Basque fishermen say the decision represents "a massive blow for the fleet."

The EU's Scientific, Technical and Economic Committee for Fisheries confirmed on Monday the recent report by The International Council for the Exploration of the Sea which recommended that the current ban on anchovy-fishing currently in force in the Cantabrian Sea be maintained for another year, taking it up to July 2010.

In line with the ruling of the committee, which supports the view that there are still insufficient numbers of anchovies in the sea, the veto - originally in force until the end of June 2009 - will be automatically extended.

"According to the scientific verdict, the current bio-mass of anchovies is at 21,270 tonnes," in other words, at a level inferior to 24,000 tonnes, the minimum quantity at which the European Commission considers fishing to be permissible.

"As a consequence, the ban on anchovy fishing should remain until further reports indicate that the bio-mass has once again risen above the 24,000 mark."

Sources indicate that the next scientific report on the state of the fishing-ground will be published in June 2010.

Basque fishermen confirmed that the decision represented "a massive blow for the fleet" which were hoping to be able to go out fishing. Secretary for the Biscay Brotherhood Federation, Aurelio Bilbao, reiterated that the veto is already in its fifth year and was now becoming intolerable.

The note was published at EiTB.