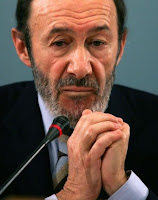 Quite used to labeling almost any event or declaration as "historical", this week both political leaders and the main stream media chose to tip-toe about an unprecedented moment that may prove to be more transcendental than the original assessment. For the first time in history an Spanish Interior Minister has conceded that the Basque pro-independence left is right. Because non less than that is what Alfredo Perez Rubalcaba did when he stated that even if the event that the pro-independence left were to condemn violence and then request to be within the law "the answer would be absolutely no". That was the end to the mantra that said that "all they needed to do is to condemn", thus validating what the pro-independence left said all along: that what really is outlawed is not any given political party but the ideals they stand for -the independence of the Basque Country and socialism-, and that the resolution of the political conflict can only be the result not only from the return of those ideals to the legal framework, but from the viability of their project being equal to the rest of the political options. With only one valid condition, that the only democratic demand will be to gather the necessary social support.

Previous to Perez Rubalcaba's statement the only time when something similar happened was when Jaime Mayor Oreja admitted that "ETA never lies". Only that by then Mayor Oreja was not the titular of the Interior Minister anymore and his word were encased in a verbal attack against the PSOE, which in turn reduced the value of the statement. Nevertheless, the big difference resides in the fact that the statements by the Interior Minister take place with him acting as the spokesman for the Spanish regime, a regime that has not rebuked Perez Rubalcaba's statements. Quite the opposite, Rodolfo Ares, who holds the equivalent post in the Basque Autonomous Community and as a member of his political party, supported his boss' statement.

The only person that may have pondered the gravity of Perez Rubalcaba's statement -besides the direct recipients of the statement- has been Patxi Zabaleta, who is usually used as a Troy Horse against the pro-independence left by the Spanish regime and the rest of the political parties. The stark evidence of what has been more than evident for so long, specially coming from the Spanish Interior Minister, exposes many of the pontifications that, disguised of innocence and good will, had been released in an attempt to blame the pro-independence left for the severe lack of civil liberties endured in the Basque Country.

It is certain, in any case, that the mere condemnation of violence, resorting for a moment to the terminology in vogue at this time, does not necessarily imply the honest compromise to what is being repudiated. Perez Rubalcaba himself is the best example for that for he belongs to a political party that throughout the years condemned the GAL's actions the while file and rank carried out a dirty war with the financial support by the very same government that he was a part of. The final guilty verdict, although merely testimonial, against a number of those involved in the violent deaths of 23 Basque citizens did not prevent the PSOE from openly showing its support, to the extreme of accompanying them all the way to the very gates of the detention center in Guadalajara.

And the same can be said about the PP with respect to the Franco era regime. Only that, on top of it, in this specific case the conservative Spaniard avoid making that condemnation public. In some cases, like in the case of the always honest Mayor Oreja, they have no qualms when it comes to speaking highly of the dictatorship.

Having said that, there will be those who will insist that the GAL, the Franco era regime and ETA are simply not the same. And it is true. But, why should they be different in the sense that they think and not in the senses considered by the pro-independence left?

Why are the Spaniards allowed to support their "truth", their view of history, but the pro-independence Basques are persecuted for stating what they think, or even for thinking the way they do?

There will be those who, when it comes the time, will consider that their political party has never been involved in any instance of political violence, that their slate is clean, and that it has only resorted to the lawful violence bestowed by the democratic institutions. Many in EA and the PNV will think that way. But, unless they consider that the appraisal done until now is false, that the reality shown without cover-ups by Perez Rubalcaba is not such, will have to accept the fact that this panorama is long ways from what could be considered democratic and that they have behaved as is if it was democratic. In such case, violence has been exercised in the name of law, but not in favor of justice nor democracy.

The very same, or even more, can be said about the present situation in which we find the Basque political conflict. The option to systematically outlaw demonstrations was first used by the PNV. The same way, those who refuse to accept their responsibility in the violence that has been generated should at least accept their responsibility for not thoroughly seeking a solution to the situation within the parameters of justice, democracy and liberty. The vertigo shown at Loiola by the top jelkides is a good example of that.

Summing uo, is time for everyone to renew their respective compromise, and stop their outlandish demands to others. Is time for some serious self-criticism, with no room for self-indulgence. Now is not the time for morally unproductive condemnations, whether they are true or false. Is time to propose political solutions in the short and long term.