Great news, Hugo Chavez was unable to exchange Basque political refugee Iñaki Etxeberria over an oil profit deal with Madrid according to this note published at Venezuelanalysis: 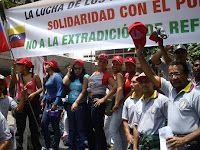 Spain charged Etxeberria with attempted homicide during an incident in Spain in 1993. On Tuesday, the TSJ ruled the extradition impermissible because the prescripted period in which to try Etxeberria for the crime had expired, according to Venezuelan law.

Etxeberria is a legal permanent resident of Venezuela who has lived in Venezuela for 13 years, having fled what he and his supporters say was political persecution of Basque leaders by the Spanish government. He currently works in a steel factory in Cojedes state.

Official police reports say Etxeberria was arrested in Carabobo state on April 25th, the day he first appeared in court. However, his defense lawyers say he was arrested on April 21st in Cojedes state and effectively "disappeared" for four days.

On June 30th, an investigator from the Attorney General's Office argued before the TSJ that Etxeberria's arrest was illegal, and that the charge against him contained factual contradictions and legal irregularities.

Following the investigator's argument, a TSJ decision was expected within 10 days, but the decision was delayed for more than a month. Marco Rodríguez, a defense lawyer for Etxeberria, accused some TSJ judges of "seeking ways to turn him over to Madrid," beyond the official charges. Meanwhile, Etxeberria was held in police custody for more than 100 days until his release on Tuesday.

Etxeberria's defense lawyers called for an investigation of the police who arrested Etxeberria to probe for possible violations of the activist's rights.

Last month, Canada extradited another Basque nationalist, Jose Joaquin Oleaga, who was charged with the same crime as Etxeberria. Soon after, a Spanish court absolved Oleaga and dropped the charges.

According to the Caracas-based Committee for the Liberation of Iñaki Etxeberria, a coalition of more than fifty Venezuelan revolutionary organizations, the TSJ's decision is a victory for the revolutionary forces over the "right wing that disguises itself as pro-Chavez" within the socialist Bolivarian revolution led by President Hugo Chávez.

Over the past month, the Committee held demonstrations and wrote letters urging the denial of Etxeberria's extradition to Internal Affairs and Justice Minister Tarek El-Aissami, National Assembly President Cilia Flores, Finance Minister Ali Rodriguez, and top leaders of the United Socialist Party of Venezuela, but received no reply.

The Committee, which includes distinct leftist organizations such as Marea Socialista, C-CURA, the Bolivarian Continental Coordinator, and the political studies department at Venezuela's Bolivarian University, says the government should provide refuge for Etxeberria out of solidarity with the cause of Basque independence, not just because "Bourgeois laws" rule extradition impermissible.

"Beyond this bourgeois legality, we should pressure our government to address these problems in a revolutionary manner," Committee spokesperson Susana Gonzalez told Venezuelanalysis.com. "Someone who struggles for the liberation of his people from two terrorist states like Spain and France should not be criminalized by any revolutionary in the world."

More than 5,000 Basques have been tortured over the last three decades and hundreds remain under arbitrary arrest on suspicion of being ETA militants, according to the Committee.

The United Nations Human Rights Commission has repeatedly reprimanded Spain for the use of torture and preventative detention under the auspices of domestic anti-terrorism laws, and for failing to turn in human rights reports to the U.N. that are mandatory for signatories of the International Pact on Civil and Political Rights.

The Spanish government considers ETA a terrorist organization and blamed the group, which is a clandestine movement as well as a public political party, for the bombing of a Spanish Civil Guard barrack last week. The Venezuelan Foreign Relations Ministry and Chavez himself publicly condemned what it called the "terrorist" attacks.

The attacks came while Venezuelan and Spanish officials and business executives were meeting in Caracas to arrange joint energy production and finalize details in the indemnity payments for the nationalized Bank of Venezuela.

Maybe one day Hugo Chavez will tell the world why he hates the Basques so much. Then we will remind him that his beloved Simon Bolivar was a Basque and how much the Spaniads loath his memory.