Winds of Freedom in Catalunya

It started in the tiny town of Arenys de Munt, know its all over 100 towns across Catalunya. Madrid spends millions of euros each year making sure that the main stream media portrays the political conflicts in Catalunya, Nabarra and Galiza as something of no consequence when in reality Spain fails to comply with the International Covenant on Civil and Political Rights that demands self determination for all nations that endure colonial occupation.

So you can imagine just how angry Spaniard must be to see that the international community is learning about the call for independence in Catalunya. Here you have one example, an article published at Bloomberg: 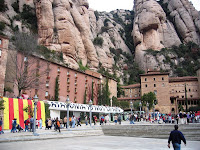 Oct. 5 (Bloomberg) -- More than 100 towns in Catalonia voted to hold referendums proposing independence from Spain, an attempt to press national leaders to heed their views.

The 117 unofficial referendums will take place on Dec. 12, Feb. 28 and April 25, Jordi Fabrega, spokesman of the Decidim.cat initiative said in a telephone interview after a meeting of around 100 mayors and municipal representatives near Barcelona on Oct. 3. The movement includes representatives from all political parties except the People’s Party, the biggest national opposition group, he said.

“As the constitution prohibits it, we decided to do it ourselves in a very democratic way,” Fabrega said. Private entities will organize the voting to avoid legal problems for the town halls, which are not allowed to hold referendums. “There’s no stopping us now.”

The polls, which have no legal weight, are an attempt to exert pressure on the government of Prime Minister Jose Luis Rodriguez Zapatero to allow Catalans to decide whether they want to remain part of Spain. They will follow a similar poll in the village of Arenys de Munt on Sept. 13, where 96 percent favored independence. Described by the government as illegal and unconstitutional, the referendums may also stir unease in the capitals of other European countries such as the U.K., France and Belgium where separatists are pushing for more autonomy.

“It may cause a frisson of concern if they seem to give others what would be perceived to be false hope,” said Hugo Brady, Senior Research Fellow at the Centre for European Reform, a London-based think-tank.

Spain’s 1978 constitution ended an almost 40-year dictatorship and established a system of autonomous regions with varying degrees of self-government, including Catalonia and the Basque Country, both of which have their own police and use co- official languages. Rather then defuse nationalism, the return to democracy and entry into the European Union fueled tensions. The Basque terror group ETA has killed more than 800 people in its campaign for independence.

Joan Costa i Font, a lecturer in European social policy at the London School of Economics, said the referendums were a “laboratory experiment to test the central state reaction,” and a “first step towards a large-scale referendum backed by the Catalan parliament.”

More than half of Catalans favor some kind of break with the central government, according to a poll in July by the regional government. Nineteen percent backed outright independence with another 32 percent saying it should be a state within a federal Spain, the poll said.

The regional government is a coalition including Socialists and Esquerra Republicana de Catalunya, a republican party which favors independence from Spain and counts Welsh, Corsican, Flemish, and Scottish nationalists among its allies in the European Parliament.

The Scottish administration, led by the Scottish National Party, intends to hold a referendum on independence for 2010, which First Minister Alex Salmond said Sept. 23 may include an option allowing voters to opt for greater autonomy rather than full independence from the U.K.

We want to remind Emma Ross-Thomas that Catalunya, Nabarra and Galiza are not mere "regions", they are nations.

Oh, and maybe she could venture telling us how many Basques have been murdered since the XII century when Castile started the invasion and colonization of Nabarra (the Basque Country).